Well, this post is technically from yesterday, but I’ve decided to keep my original title because it’s still very relevant. Yesterday was an ocean themed day as I had fish for dinner and went for a beach jog!

I was very nervous about making salmon, as you know, mom, because I must have called you five times asking if I should do this or that; glass or metal pan? Do I put wine in the bottom? Etc.

What I ended up doing was attempting to recreate a dish I had when I went to New Orleans this January: blackened catfish with a butter and Crystal hot sauce glaze. Now, what I ended up making was blackened salmon that was just a little tiny bit too hot (but still pretty delicious). To cool down the spices I made a healthy potato salad and some simple cooked spinach. My big lesson of the week was timing: trying to time cooking the spinach and the fish and letting the potatoes cool enough so that everything was the desired temperature at the same time. That was pretty tough. 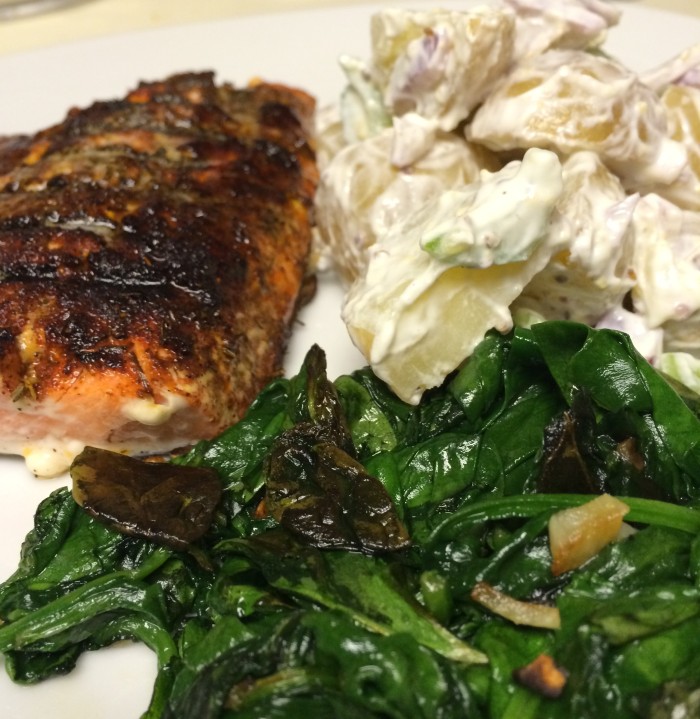 I’ll write down my recipes from easiest to hardest:

For the Potato Salad:

And I had some leftover potato salad, grapes, and a banana for lunch, but that looked a little too weird, and since I took a weirdly placed, weirdly long nap I just had a little popcorn and yogurt for dinner. Neither meals were worth documenting, so that’s why there’s nothing new tonight…

I also, in attempt to better my life, not just in the nutrition department, I went for a walk on the beach today, and boy was it AWESOME. The stairs to get down to the beach were a little wobbly but taken slowly, one stair at a time, it was totally worth it.

Okay, it has been a very long week, and it is now time for bed!

My attempt at an artsy, water-action-shot.

I can’t wait for the summer!

P.S.  I definitely want to try the Chia seed breakfast. I found a Pinterest recipe for “chocolate pudding” which just uses Chia seeds and chocolate almond milk, and I’d very much like to try that!

P.P.S. What should I make this weekend – Spaghetti squash recipe TBD, chicken Tikka Masala, or some other salmon recipe??