Now, there’s two parts to the story that led me to these fantastic little dishes, both centering around this crazy idea that I’m trying to live healthier. My first step to healthy living is eating a protein heavy breakfast every. damn. day. This is very hard. I’m a vain woman and my morning routine takes a pretty decent amount of time. And while I don’t consider myself *not* a morning person, I can’t really get myself to wake up before 7:30, which would give me the extra breakfast time. So quick and/or ready-to-go is a must. 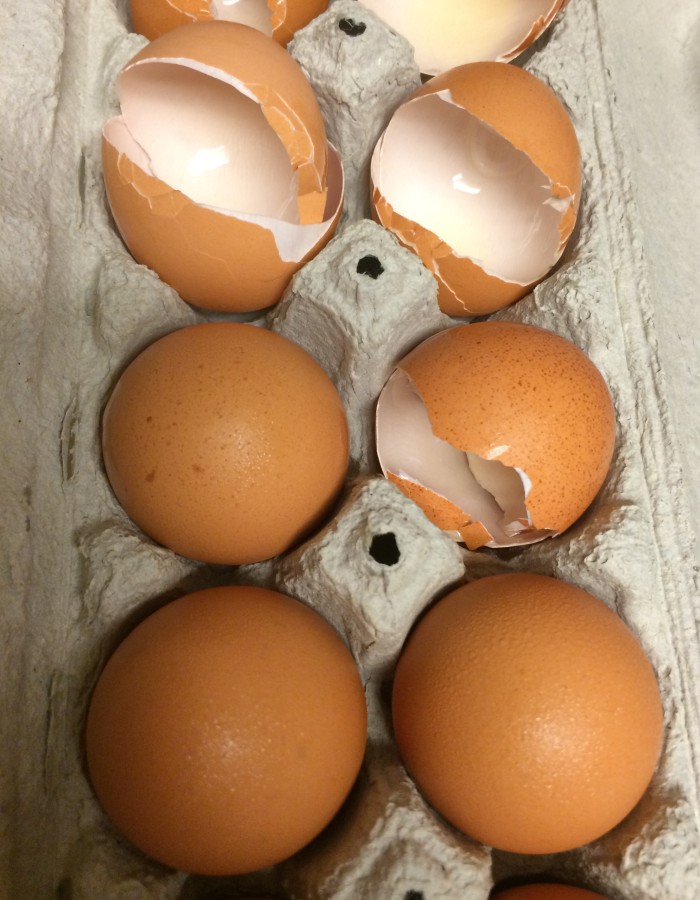 I also peruse the “Eat Cheap and Healthy” subreddit occasionally, and though it’s a lot of not great ideas, every so often there’s a good idea, one of those being mini-quiches. Then I was reading an amazing food blog, The Bojon Gourmet, and she had a crustless bacon-gruyere-chevre-leeks quiche recipe that looked amazing. So I decided to make Bojon-esque mini quiches!

Now, I did like the bacon idea, but gruyère cheese is expensive. Like, manchego level expensive (oh, manchego! I can remember the first time I ate manchego cheese, down the shore in 2011, I think…). Anyway. So I opted out for a less expensive, but still fancy, cheese – asiago! So bacon + chives I took from Bojon, basil + parsely were recommended by a muffin-tin quiche recipe from ECaH, but the rosemary I added because of my love affair with that herb. The smell, the taste! Put rosemary on anything to instantly class it up. 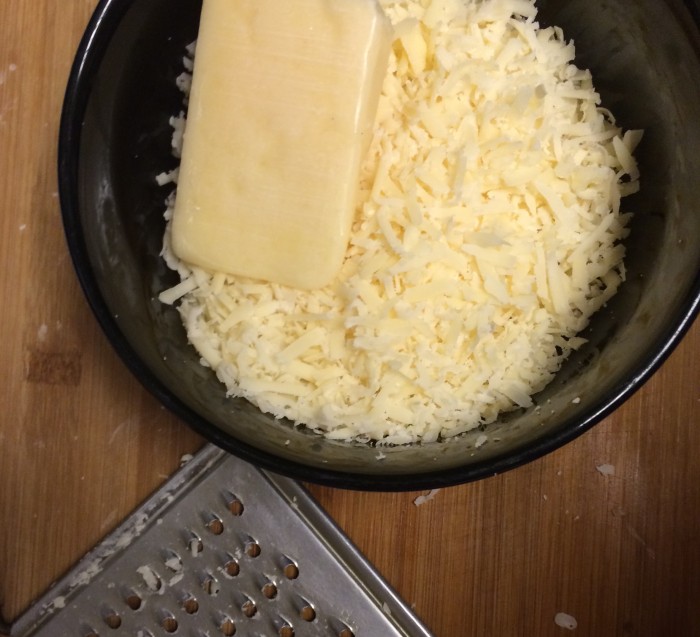 I also decided on shallots and yellow potatoes. Shallots don’t have as much of a bite as onions, they’re a little sweeter, and I thought just a touch of potato would be a nice starch to balance everything out. Of course, while this is a crustless quiche made with lots of herbs and yummy-ness, I did cook the potatoes and shallots in the leftover bacon grease because I’m a poor grad student, I can’t let valuable cooking fat go to waste!

In other news – I’ve decided to switch up my layout, after reading copious food blogs. The first half will be pretty pictures and ramblings, the second half will be the recipe. Qualitative, then quantitative!

I have forgotten to mention the best part about these mini-quiches – they freeze! And can be warmed up for breakfast as needed! This recipe made a ton of quiche, and the most expensive thing was bacon! Which, I think I might get at Costco, cause I can freeze than and use as needed… 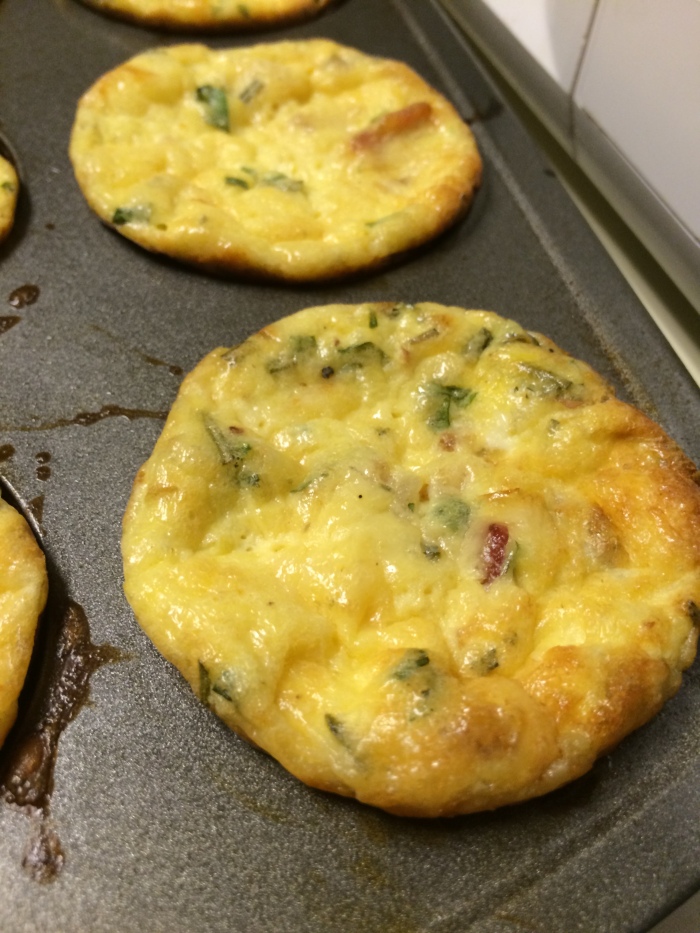 And now, without further ado:

Cook all of the bacon, leaving the fat in the pan when finished. In retrospect, you won’t need all the fat leftover, so dump most of it out. While the bacon cools, cook the finely diced potatoes until tender, about 5-7 minutes. While the potatoes cool, cook shallots until slightly tender, 2-3 minutes.

While the shallots (and everything else cooked) cools, whisk eggs, salt, pepper, cream and milk. A lot of recipes recommend doing that in a blender, but I just used a fork and it came out fine. Mix in herb mix. Add in the bacon, potato, shallots and HALF the asiago cheese. Mix everything together until well blended.

Ladle mixture into muffin tins, leaving a little room at top. Use the other half of shredded cheese to sprinkle on top. Put in the oven for 20-25 minutes, rotating halfway through. 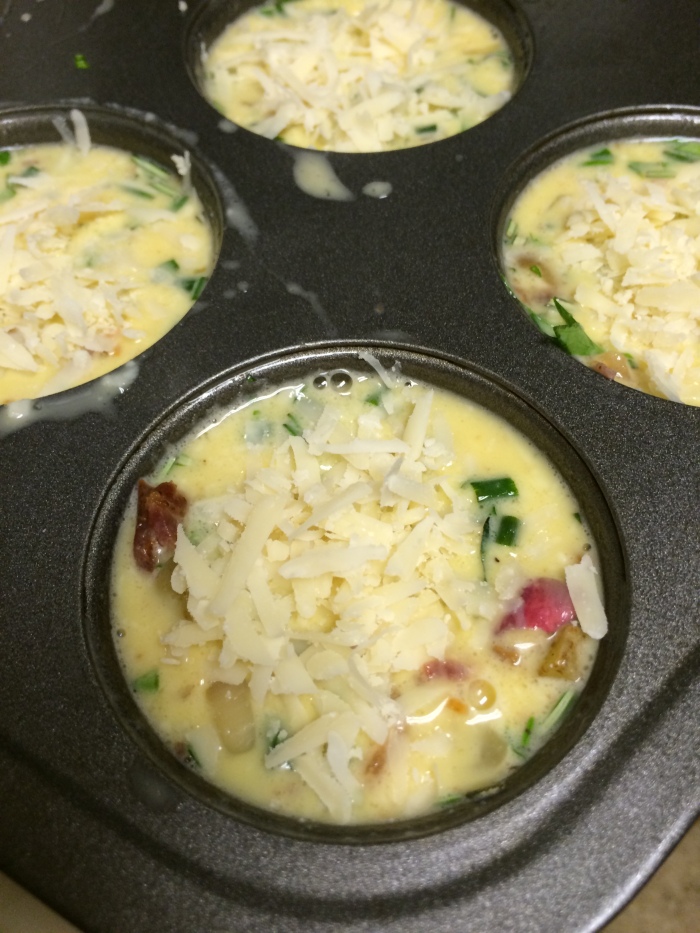 To check if a quiche is done there are two methods: 1. shake the pan a little – if tops jiggle, they need more time 2. stick a knife in the quiche, if it comes out clean, you’re good! Don’t overcook!! Dry quiche is no good!

Let cool for 5 minutes before running a knife around edges to release from pans. Once completely cool, you can wrap them individually and freeze them to eat for breakfast all week! (But make sure to transfer to fridge before you go to sleep so the ice crystals inside melt before you stick in microwave!)

I had two this morning – that seems to be a perfect serving size – and I heated them up in the toaster oven – SO GOOD. Seriously, I was so impressed with myself. 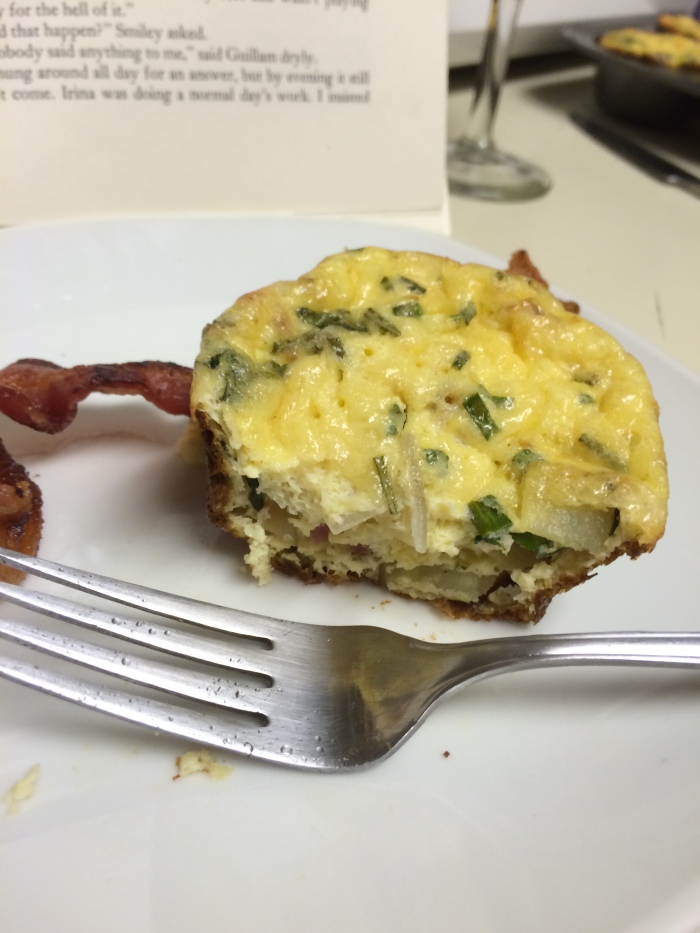