Ah, chicken. My main source of protein, followed shortly by Greek yogurt. In the past, what have I done with chicken? Well, I’ve cut it into chunks and stir fried it. Or breaded it and fried it. Tonight though, I went from grad student to grad student with big dreams for a Monday night. I had bought some frozen chicken breasts a while ago, had a single Granny Smith Apple (my favorite kind of apple), and some Brie cheese that was about to get tossed when I said to myself “Damn it, Melissa, you’ll make a real meal!”

I also made sweet potatoes, which were super simple and amazing (though I got that recipe from Rachel Ray… The chicken is 1/2 Melissa and 1/2 outside collaborators…)

Speaking of my collaborators tonight: You know you are one, mom; I called at least 5 times to ask if I was doing X right, but I have to give a shout out to my second mom, Mama Rossi, who I hope reads this so she knows I didn’t blow up the kitchen! I called Mrs. Rossi for other reasons and then as we were chatting, I told her about my half-baked plan (badum ch! cooking joke) for tonight’s dinner, and she set me straight with some crucial steps: put an onion and some white wine in the bottom of the pan, cover with a foil tent for the first 25-ish minutes, add some more wine in the last five minutes of cooking… So Mama Rossi, it all worked! 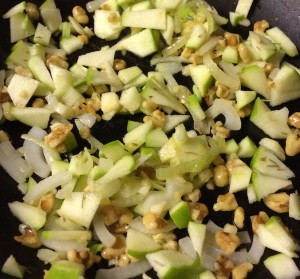 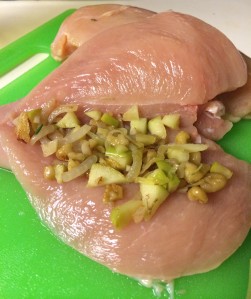 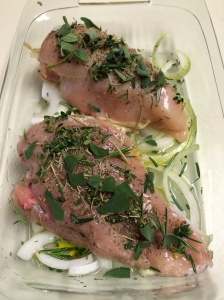 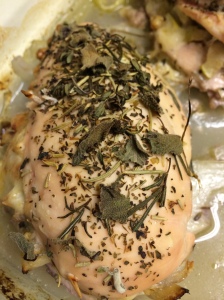 Part 4: Get real fancy with some sauce!

Sham-WOW was this delicious. Mom, I won’t lie, I was so super impressed with myself. Because these kinds of things always seem like they’re gonna be a huge hassle and really tricky and then I managed to make it happen!

A lot of people don’t like Mondays, and at least 60% of the time I’m one of them. But this Monday, I handed in Cosmology in the A.M., got a good grade back on my Nuclear midterm, sat outside for an hour and a half talking with one of my favorite upper classmen, and then made this! Stat Mech is the only big thing due this week, and that’s not till Thursday, so today was my Melissa day!

Plus, I have the second breast to eat tomorrow for dinner (which is good, cause I’ll hopefully be too busy working to get extravagant…) .

Though I won’t lie, this was a perfect dinner for two… I’m gonna have to find someone to cook for! 😉