Do you like my title, ma? There’s this awesome show called Bob’s Burgers and each episode Bob writes a Burger of the Day up on the board, and they’re usually a pop culture reference of some kind. I thought I’d start get creative with my titles too!

“I Know Why the Cajun Burger Sings”

Anyway to start my miso soup, slice up some scallions and halve some tatsoi. What is a tatsoi? I have no clue, but they tasted pretty good! 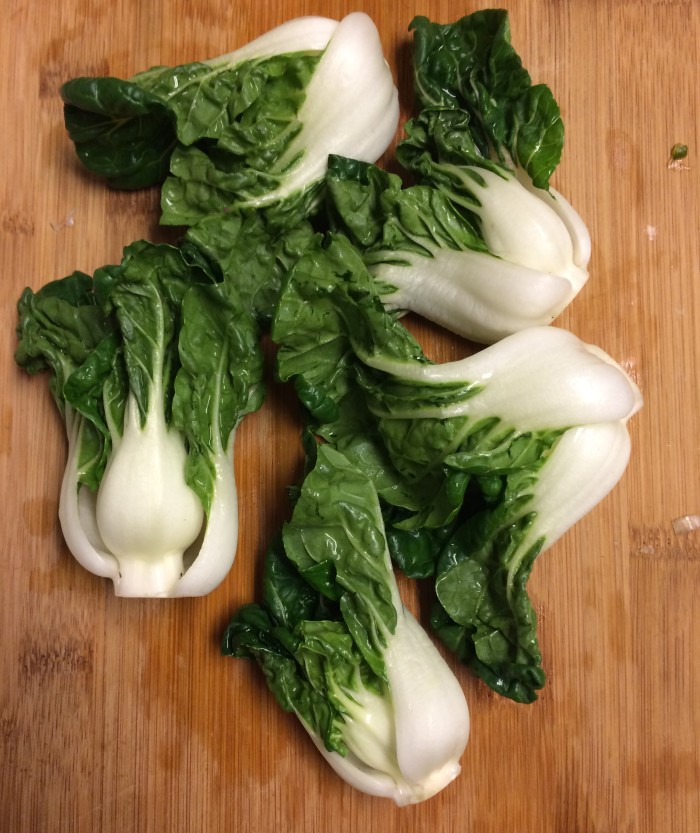 At first I thought they were Bok Choy but they’re not! Anyway. Half those puppies and the scallions and that’s most of the hard work of this recipe! 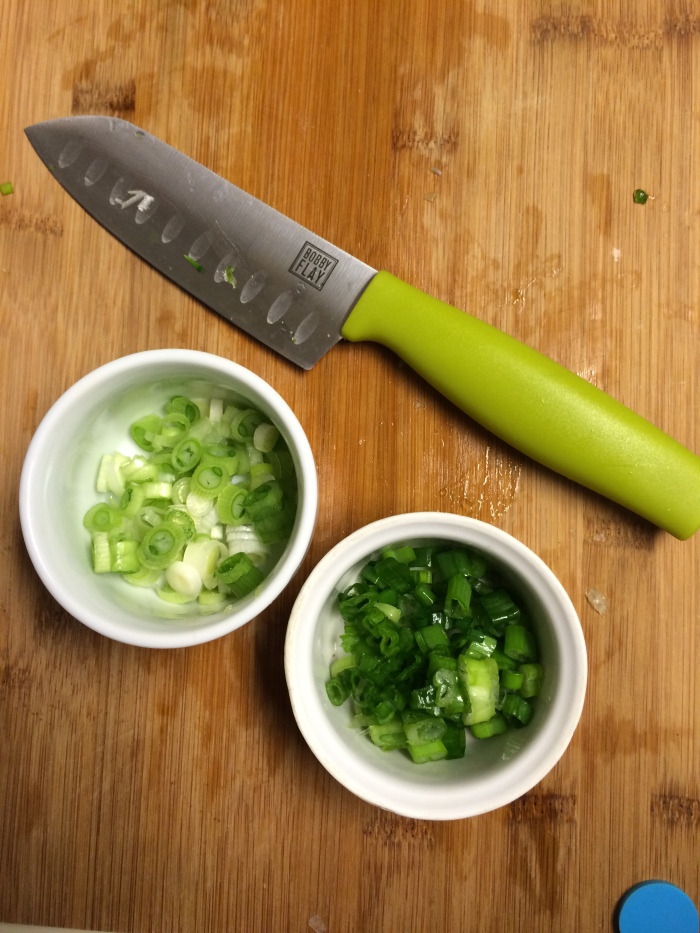 Divide the scallions into the whitish parts and greenish parts. Set the green ones aside. Then peel and mince some ginger.

So before doing anything else, heat some salty water to boiling. Then, in a separate bowl mix together miso paste, takami, and 1/4 cup of water. In a big pot, heat 2 tbsp olive oil. Sauté tatsoi, ginger, and white parts of scallion till the tatsoi wilts a little. Add the miso mixture, 3 cups of water, dried wakame, and some sriracha. Now, ma, you know I don’t like spicy so I didn’t put much sriracha but just enough made it taste pretty swell.

Let this simmer. Meanwhile, that pot of boiling water should be ready – add some homemade ramen noodles (or regular ones). This was so comical to me for some reason, because ramen has become the stereotypical cheap college kid meal. But anyway.

Okay, now that the soup is simmering and the ramen are done, it’s time to sear the salmon.

Look at that beautiful color!!!

First, pat dry and season with salt and pepper. Then, heat some olive oil and sear the salmon by cooking on each side for a few minutes. Sear? Is that the right expression?

While the salmon cooks, put some ramen in a bowl, pour the soup over the ramen, then top with the salmon when it’s done. Garnish everything with the green scallion slices and sesame seeds. 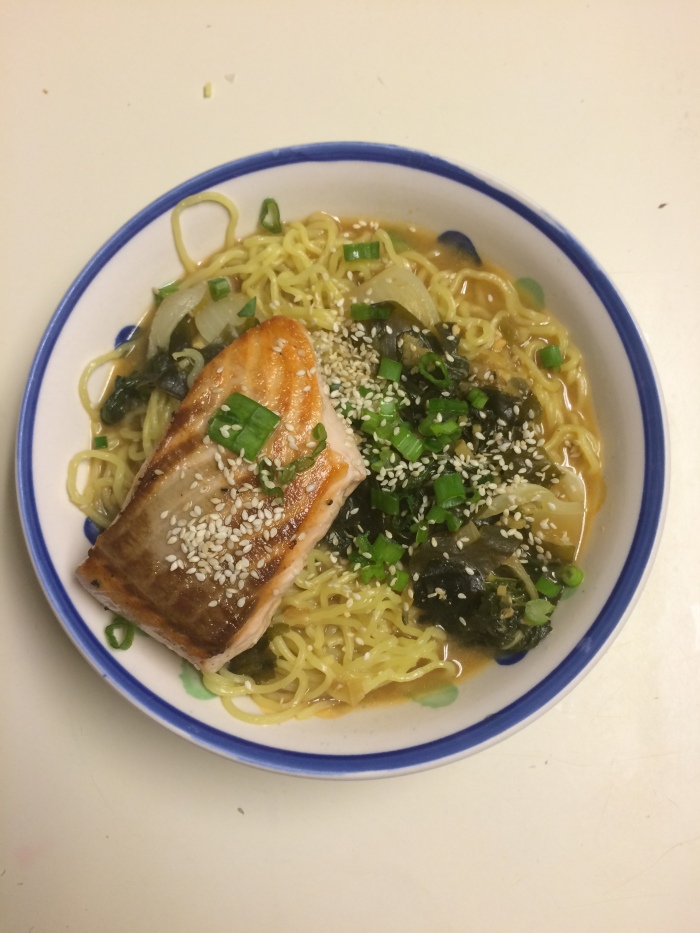 MA, Look how professional it looks!!! Also, the salmon was PERFECT. It was cooked just enough that I could eat it with chopsticks with ease. Seasoned perfectly. So good. My only note is that I really didn’t need to salt the pasta as much as I did because this was a pretty salty dish. But totally worth it. 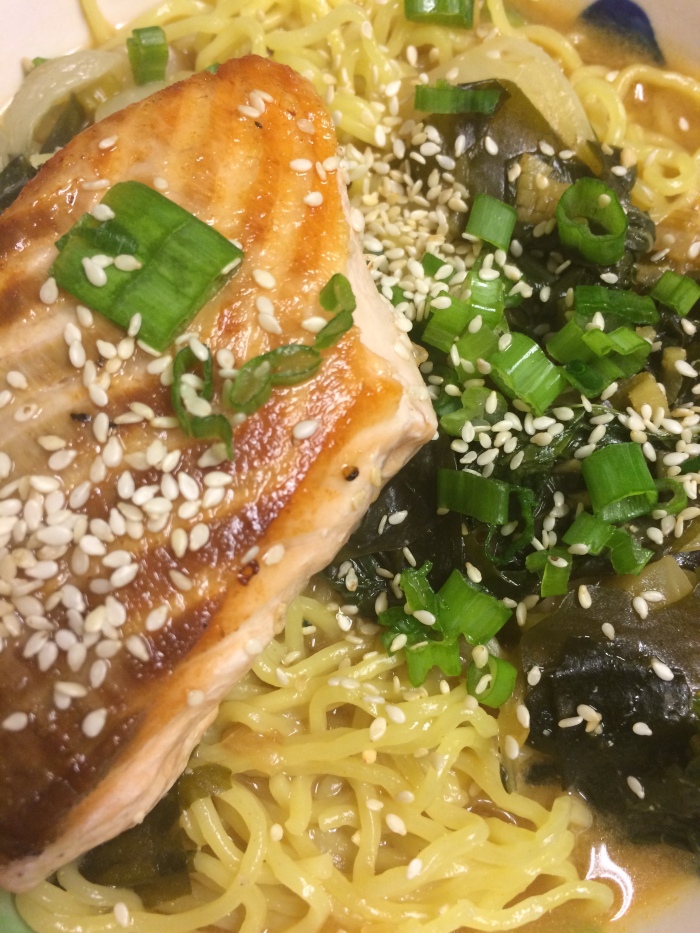 And look I even had chopsticks and those little spoon things you’re supposed to use with miso soup!