I won’t lie to you mom, I also am 25% hungover. Yesterday was not only St. Patrick’s day, but also the beginning of March Madness! And guess who made a bracket despite knowing nothing about basketball whatsoever – this gal. I picked teams based on people I know who went to school there, seed number, or which mascot seemed cooler. So shoutout to all my Ohio cousins, cause I pushed Dayton (perhaps a little too) deep in the bracket… But as of today, I’m tied for winning with two other guys in my bracket. Crazy, right??

Anyway. Back to food stuff. Since this was the week of St. Patrick’s day I decided to make Irish Soda Bread. It’s actually really easy! And you can go to the official website for it: The Society for the Preservation of Soda Bread. And their recipe is so simple & short I will post it directly here:

Preheat the oven to 425 F. degrees.  Lightly crease and flour a cake pan.

In a large bowl sieve and combine all the dry ingredients.

Add the buttermilk to form a sticky dough.  Place on floured surface and lightly knead (too much allows the gas to escape)

Shape into a round flat shape in a round cake pan and cut a cross in the top of the dough.

Cover the pan with another pan and bake for 30 minutes (this simulates the bastible pot).  Remove cover and bake for an additional 15 minutes.

The bottom of the bread will have a hollow sound when tapped so show it is done.

Cover the bread in a tea towel and lightly sprinkle water on the cloth to keep the bread moist.

SO SIMPLE. And actually upon reading more, I found that currents, raisins, caraway seeds and the likes are not part of traditional Soda Bread recipes.

…that being said I really like caraway seeds, so I added 2 tbsp. Also, notice my Irish Claddagh ring!

Anyway this was so easy to make, and really tasty. I had a little for breakfast each morning, shared with friends.

This was a pretty neat bread to make because it’s actually pretty hard to screw up… You just have to be careful not to over-knead the dough or else it gets tough. If anything, I under kneaded, though because it was nice and soft and edible.

What did I eat with it you may ask? Well, a cup of coffee, a little whipped butter and honey and this was a really nice treat. Now the issue is, I have a cup or so of buttermilk leftover, but not enough to make another loaf… Maybe pancakes tomorrow? 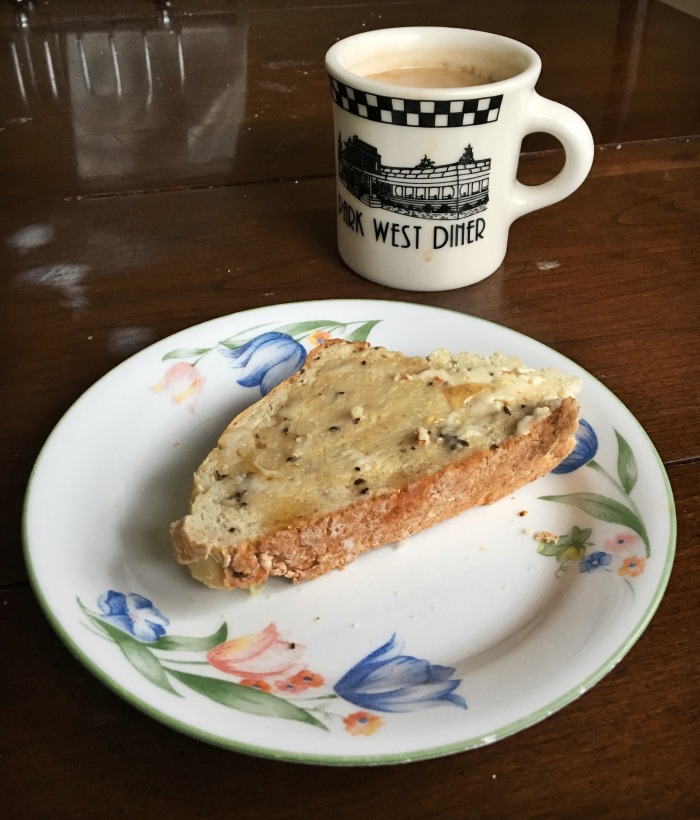 Also, check out who’s featured on my favorite coffee mug – my favorite Jersey diner! (I would argue the best, but people have some strong opinions about Tick Tock, so I hear…)