I need to work on my titles, I think… Ma, I just got off the phone with you (well, you convincing my little brother that you’ve definitely made this meal before) and we somehow managed to plan the same dinner without even telling each other! Tonight I went coco-nuts with coconut! Hahahaha, get it?? This is actually a variation on a dish that you make a lot and is one of my favorites!

To start with, I made a mix of deliciousness for the crust: shredded coconut, toasted coconut, crushed almonds, panko, and a pinch of black lava sea salt. 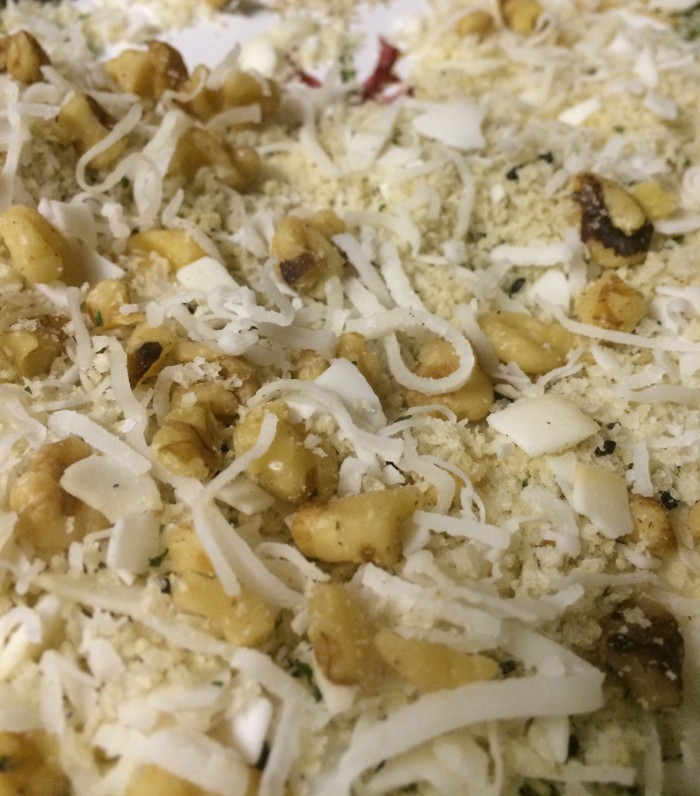 Then, with my not-so-amazing cooking skills I tried to work two pans at once. In one pan I put some EVOO and started cooking some garlic and red onions (I am so predictable, just try and guess what I’ll add to that…)

While those were cooking I melted some coconut oil in another pan for the fish. I coated the tilapia filet with egg, then dipped both sides in the coconut mix. 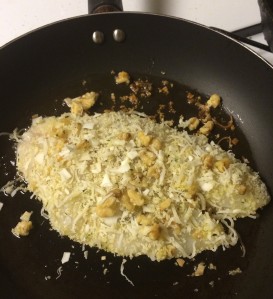 The coconut/walnuts didn’t stick very well, but once whatever fell off the fish was toasted up, I would just take it out of the pan and put it aside to put on top once it was ready… And OH MY GOODNESS, it was DELICIOUS. Seriously, I don’t know if it was the coconut oil (I think it really did make a difference) or if the fish was really good or what but it was cooked perfectly, not dried out at all, but still had a crispy crust and on a bed of spinach and onions (that’s what I added to the onions – are you surprised?) it was AMAZING.

I took a few bites before taking the final picture, it just smelled so good…

Seriously the best fish I ever made! And apparently you made it tonight but slightly different. I know you’ve got a lot of work to get done tonight, but you’ll definitely have to post yours so we can compare and contrast.

Not going to lie, I’m super proud of dinner tonight and I’m probably not going to post tomorrow because I have one more filet and I’m definitely trying this again. Although – how can I make the coconut and walnuts stick better?? ProTips needed!!

P.S. You can tell how often I use red onions, garlic, and spinach in my cooking because when I went to tag this post, I clicked “show most used tags” and other than ‘healthy eating’ the three next largest (and thus most used tags) are ‘garlic’, ‘red onion’, and ‘spinach’…